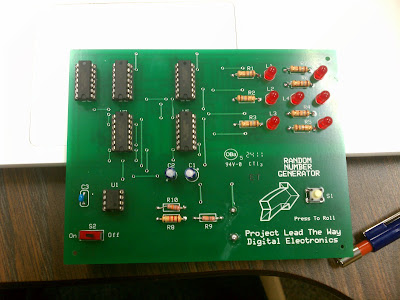 This is a project that we had to build in Engineering academy. It uses a 555 timer as a clock for the Logic chips, which light up an array of LEDs that are configured in a dice pattern. So essentially it generates numbers 1 to 6.  This is called a Random Number Generator, but really that is a misnomer, because there are initial values set by the 555 timer chip. When you press the button on the right bottom corner of the board, this activates the 555 timer chip and the 555 timer generates a square wave. The logic chips count the number of pulses from the timer and then spits out an output of values ranging from 1-6. Some of the Logic chips are Gates and flipflops, so once you let go of the button, the 555 timer the square wave fades and then the voltages on the pins that were last activited by the 555 timer are in the HIGH logic state. The outputs of the chips connect to the LEDs, and a value 1-6 is generated by counting the LEDs that are on after the button is pressed. This device is powered from 3 AA batteries which produce 4.5 volts, which is the necessary voltage required to activate the 7400 series logic chips. Our team was able to beat the previous record of 3 hours set by a group from last year's class. I did not do this alone. I let the people in our group solder the LEDs, Resistors, and capacitors. I taught them the proper technique and made sure that they followed the safety precautions. I soldered all of the IC sockets because those are relatively easy to mess up since the pins are about 2mm wide.

Parts list are on this PDF, which is provided by VEX ROBOTICS: http://content.vexrobotics.com/docs/270-2338-AssemblyInstructions.pdf

The Kit is available online through Vex Robotics. Link: http://www.vexrobotics.com/270-2338.html