About 3 months ago, I was searching on Craigslist for some Oscilloscopes and I found the listing for a Tektronix 7704A Mainframe Oscilloscope for only $50! At first I thought it was way too good to be true, but then I called the number that was listed with the Scope, and I soon found out that this Tektronix Scope was actually at a e-waste recycling facility and the company who threw it out is one of the biggest technical and scientific research companies in Columbus if not the whole state of Ohio (Battelle Memorial Institute). 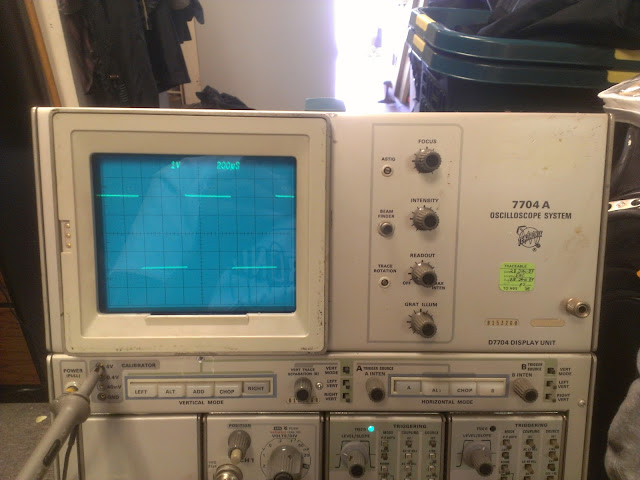 The Tektronix scope came with the original cart (Tektronix Scope Mobile) and 4 plugins. Some other goodies that came along with it were the manual, BNC cables, and calibration certificate. 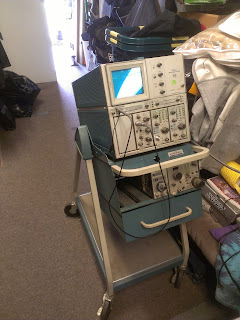 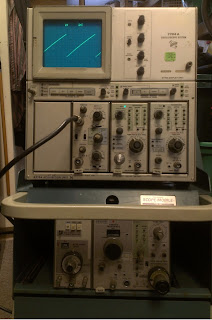 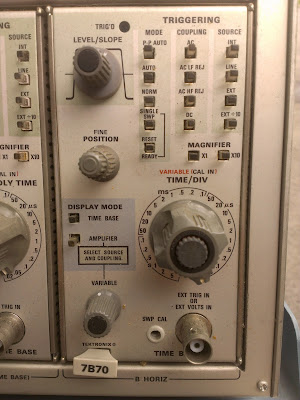 Plugin 7B70 -  Horizontal Time Base Unit similar to the 7B70.  In combination, they provide a delaying-sweep mode of operation; the 7B71 being the DELAYING SWEEP and the 7B70 the DELAYED SWEEP.
The 7B70 also has a horizontal amplifier input for uncalibrated X-axis deflection from an external source.

Both units can be used singly in all 7000-Series mainframes, or in combination to add the delaying-sweep function. Independent dual-sweep operation is possible only in mainframes with two horizontal amplifers using CHOP or ALT modes. 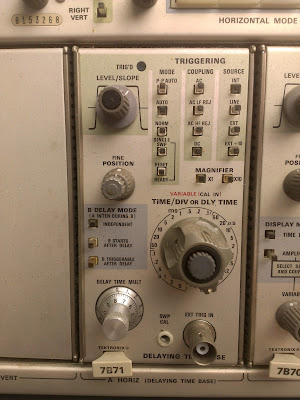 Plugin 7B71 - Horizontal Time Base Unit similar to the 7B70. The 7B71 (occupying the A horizontal channel) contains the DELAY TIME MULTIPLIER and control circuitry to release the 7B70 DELAYED SWEEP (B horizontal channel) at a predetermined point during the delaying sweep. After release, the delayed sweep can be programmed to begin immediately or wait for the next trigger event.

Both units can be used singly in all 7000-Series mainframes, or in combination to add the delaying-sweep function. Independent dual-sweep operation is possible only in mainframes with two horizontal amplifers using CHOP or ALT modes. 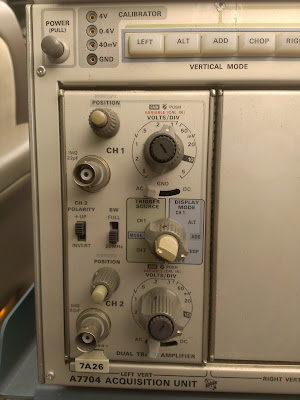 Plugin 7A26 - 200MHz Amplifier Plug-In is a dual trace plug-in which offers 5 operating modes, trigger-source selectability, and trace identify. Vertical sensitivity of 5 mV/div to 5 V/div and with appropriate mainframe, DC to 200MHz bandwidth over the entire range. Also include a 20MHz bandwidth limit switch which reduces noise in lower-frequency applications.

Bandwidth may be set at full or limited to 20Mhz. 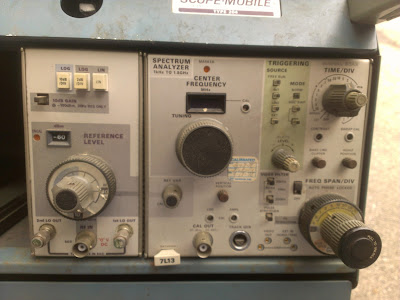 Plugin 7L13 - Spectrum Analyzer Plug-in. Designed for use in the Tek 7000-Series Mainframes, the 7L13 Spectrum Analyzer represents very high performance in an instrument of this frequency range and price. In addition to incorporating the standard features of the 7L12, it also has CRT readout of the center frequency, and an UNCAL light to indicate incorrect settings of the sweep rate or resolution controls. The FM stability is 10 Hz, making 30 Hz resolution possible across the entire frequency range of 1 kHz to 1.8 GHz. Resolution bandwidth selections from 30 Hz to 3 MHz. Automatic phase locking permits a stability within 2 kHz, after warm-up, over a one hour period. Specifications and features include fully calibrated displays with 70 dB on-screen dynamic range, IM distortion of 70 dB below full screen, spurious free operation, and -128 dBm sensitivity. source: http://www.barrytech.com/tektronix/tek7000/tek7l13.html


The Tektronix 7704A is a Great scope for general and everyday use for your electronics lab!

Hooking up the Tektronix 7704A to the Analog Discovery by Digilent!
Labels: 7704A 7A26 7B70 7B71 7L13 Battelle Mainframe Oscilloscope Oscillosocpe Spectrum Analyzer Tektronix Test Equipment